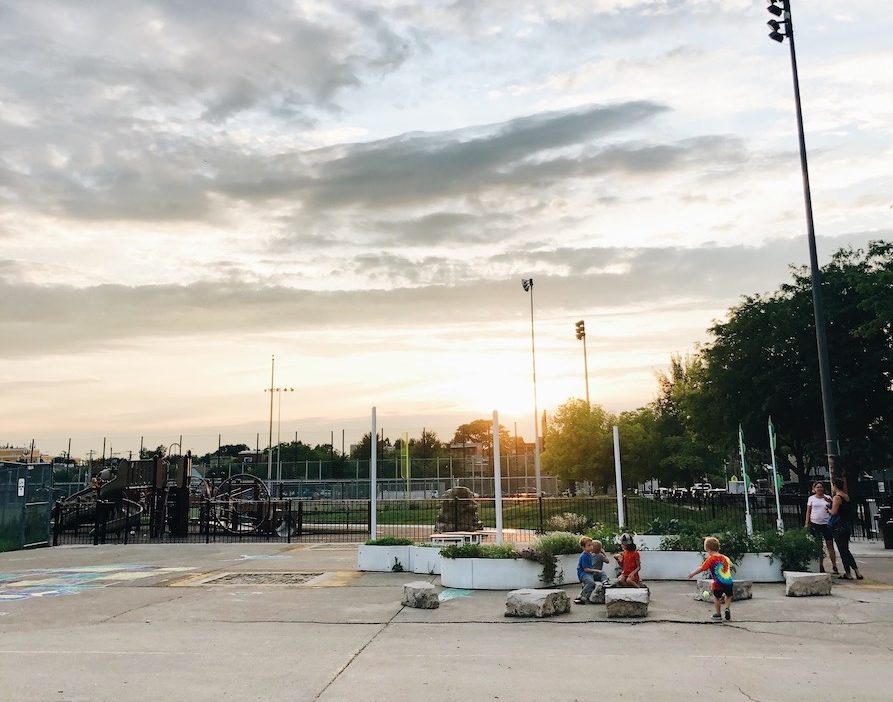 We couldn’t click fast enough after seeing the headline of a recent Vox article: The Case for Raising Kids in the City. The more we read, the more excited we became; the author was saying everything we wanted to say! Cities are often overlooked as great places to raise kids, and anytime we come across someone busting that myth, we get so much encouragement.

The author of the article, Matthew Yglesias, is the father of a 4-year-old and lives in Washington DC. He writes that urban life is often considered to be outside the norm or too expensive for families and points to recent calculations that the number of families living in high-density urban areas is decreasing. In spite of that, Yglesias remembers growing up in New York City with fondness and embraces city life with his son for multiple reasons: the ability to drive less, public transportation, fun things to do, fantastic parks, autonomy for older kids, great schools, plus all the reasons he loved the city before becoming a parent.

Here are a few of our favorite quotes from the article, but you should really read the whole thing for yourself. You’ll get a boost of encouragement and some validation that city life is a fantastic choice for raising kids—true city family solidarity!

“Relatively few [parents] think about the macro context for their choices or the fact that every additional mile of car travel built into a daily or weekly routine involves meaningful risks to your family’s safety. Of course, cars are also very useful tools — I own one and even drive it some — but building a life where car trips are generally brief and relatively rare compared to walking and using public transit has some major benefits. And that’s especially true with children.”

Car crashes are the leading cause of death for young people in America. Yes it’s morbid, but it’s a variable we can control—driving less is safer and there are plenty of alternative options in the city.

“Driving the car, I need to keep my eyes on the road and distraction to a minimum so we don’t all crash and die. But on foot, on the bus, or on the Metro, we can connect. Strolling around the neighborhood, we can stop and watch a construction crew at work, speculate about where a fire engine is heading, say hi to various dogs, peer into shop windows or do whatever else we want. Freedom is a bit more restricted on transit, but I’m still able to fully engage with him — sitting adjacent to him, talking face-to-face, with no distracting need to pilot the vehicle.”

Talk to any city parent who takes public transportation regularly, and you’ll hear something similar. The mental space freed up by not needing to operate a three-thousand-pound hunk of metal on wheels can be used to play games or talk about the world or make connections with your kid instead. And as Yglesias writes, on the bus or the subway, “the journey can be just as much a part of the activity as the destination.”

“To take your kid to play outside in the city, you generally need to go to the park. But there are some real upsides to this. For starters, a city’s parks department does the upkeep, rather than busy parents needing to carve out lawn care time on top of everything else. Most crucially, not only do you need to take your kid to the park, so does everyone else. Which means that any time the weather is remotely amenable, the park is reliably full of children and parents. That’s a great way for kids to get to know other kids, and also for parents to build relationships and community.”

Sound like your life as a city parent? That’s the beauty of third places—a space that is familiar and comfortable enough to feel like you belong, but shared enough that feels like part of the city too. Think parks, libraries, public courtyards, cafes and coffee shops. Parks are valuable both as third places and as spots where we can interact with nature. No lawnmower necessary.

Safe Autonomy for Teens and Preteens

“Letting children of double-digit ages gain graduated access to walking, biking, transit, and taxis in a place where those are the normal modes of getting around is a huge advantage. . . .[In the city,] not only can older kids and teens get around safely, there are things for them to do.”

As kids grow older, they want (and need) more independence. City life gives teens and preteens a safe and gradual way to more and more autonomy. For example, walking to the convenience store or to get a slice of pizza after school is no big deal for a teen in the city. Busses and trains offer transportation to a friend’s house on the weekend, and a cheap ride to the movies or a museum. Those freedoms are much harder to come by outside the city.

Good Schools and Plenty of Choices

“Urban schools’ performance has improved dramatically over the past generation , while studies suggest that white parents tend, in practice, to just try to send their kids to schools with fewer black students than actually assess school quality. Or, looking at it from the other direction, [economists] have found that the schools parents prefer to send their kids to don’t generate better test scores for students.”

The search for “good schools” is what drives many parents to leave the city for the suburbs once their kids reach enrollment age. But it’s interesting to look at the data—city schools have improved by leaps and bounds and the variety of school choices available to urban families is off the charts. Every parent knows it’s easy to get caught up in the good school goose chase. But as Yglesias points out, the good schools might be in our own backyard.

Cities Are Just As Fun When You’re A Parent

“Virtually anything you could say on behalf of city-living as a strategy for a fun-loving single 20-something also applies to life as a boring dad in his late thirties, as an excitable 4-year-old, or as a teenager. If you like walkable neighborhoods; “third spaces” that aren’t shopping malls; cultural amenities; short commutes; and non-chain restaurants, then America’s cities are where those things are found.

Having children may mean less time to enjoy some of those things than you used to have, but that only makes it more valuable to have access to them when you do have the time. And your kids — especially when they’re older and more independent — will likely enjoy them too.”

The city doesn’t change into a boring place the day you welcome your first child into the world and embark on the journey of parenting. The restaurants you love and walkable grocery stores you can’t imagine living without don’t evaporate into thin air. In fact, the opposite often happens. Walking the same streets you’ve always walked with a child can alert you to so many details you may have never noticed before. Granted, they’re all probably 40 inches high (at perfect eye level for a kid), but the pipes and manhole covers and spigots and Tenji blocks tell the fascinating story of the unground city.

Yglesias ends his brilliant article with a plea for more housing for families in city centers, and a request for society at large to stop considering urban child-rearing to be unnatural and undesirable.

You know as well as we do that city life with kids is a fantastic way of life. It may not be easy every day (the powers that be have long treated cities as not-family-friendly, and we’re still dealing with the difficulties of infrastructure and accessibility and safety), but trading an attached garage for a city-wide transportation system, yard work for vibrant public spaces, and a quiet cul-de-sac for restaurants and coffee and bakeries and groceries within walking distance is so worth it.

The Sidewalk Club was built to help us remember that city life is worth it, to celebrate the good days and find solidarity when it gets hard. We’re so glad you’re with us in spreading #cityfamilysolidarity, and if you want to go even deeper with it, join our private community for urban parents. We’re pretty sure you’ll find your people there.