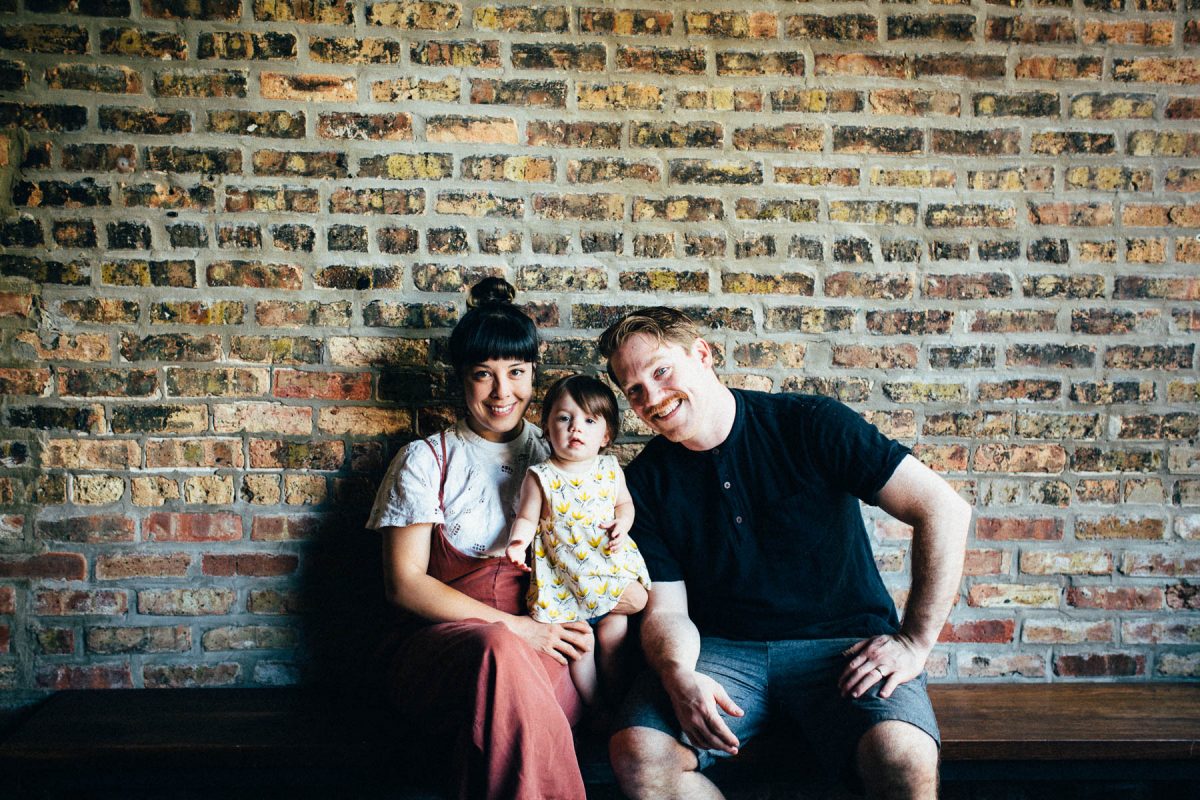 We had the good fortune of meeting up with Chad and Alicia in Chicago a few weeks ago to get their take on urban family life. We asked them a few questions over breakfast sandwiches, hot coffee, and gourmet donuts, and were inspired by their sense of adventure and the importance of community in their lives.

Chad is the Beverage Director for Longman & Eagle, a Michelin-starred restaurant in their own Logan Square neighborhood that features modern farm-to-table fare, whiskey, and craft cocktails. Alicia splits her time between caring for their 18-month-old daughter, Génépy, and managing The Creative Muscle, a new podcast devoted to strengthening creativity.

Mandalyn: So how did the two of you land in Chicago?

Alicia: We actually moved here separately and met in Chicago.

Chad: I moved to Chicago from Prospect Lefferts Gardens in Brooklyn after the economy crashed. I had moved to New York after college hoping to start a theater company in the city. At the same time I was thinking of moving out of Brooklyn, I discovered the form of theater that I was trying to pursue was better in Chicago than New York. Since I already had a community of people there from my college days just outside the city, I picked Chicago. That was 8 years ago.

Alicia: It was more of a random move for me. I grew up in Plano, Texas which is a suburb of Dallas. I lived in Plano most of my life, went to college at the University of North Texas in the nearby city of Denton, and stayed in Denton after I graduated.

I was 26 when I decided to live in India for 7 months with my best friend. Moving there gave me a bit of a bird’s eye view of my life. I found myself asking, What am I really going to do over the next 10 years? The time I spent in India helped me realize that I wanted more opportunity and a more dynamic lifestyle; I thought that would happen if I moved to a big city. I had a friend in Chicago who had an available room in her apartment at the time, so I just did it! I moved across the country to Chicago. It was August 2009. I probably would have stayed in Denton, Texas my whole life had I not taken that trip to India.

Mandalyn: So you met and married in Chicago and now you have an 18-month-old daughter, Génépy. So many people come to the city for school, and when they marry and start a family are ready to move out to the suburbs. What is it that keeps you in Chicago? Is there something that really draws you to this city?

Chad: To be honest, we haven’t actively tried to stay in Chicago. We haven’t fought to stay here. There have been times we’ve tried to start a business elsewhere, and there’s still a draw to another city that’s surrounded by more nature. But as we prioritize—we’ll sit down every once in a while and write out the things that are most important to us—

Chad: Yeah, dream chats. And if we’re honest with ourselves, the thing that matters most right now is community. We’ve found a church that we want to raise Génépy in and a community of people here in Chicago, and those are the real reasons we’re still here. Until we found that place to belong, we really were teetering on the edge of should we stay, should we go.

“We’ll sit down every once in a while and write out the things that are most important to us, and if we’re honest with ourselves, the thing that matters most right now is community.”

Neil: We have certainly found it’s a grind. You have to put in the work to make new friends and reach out to people. We’re still learning that too.

Alicia: It’s also interesting how the geography and layout of a city affects your community and who you hang out with. Some of my friends live off the beaten paths or “too far north” and I just don’t see them as often.

Even trying to get out to the lake is tough even though it’s only 3 miles away! We have not yet done a beach day as a family, and that’s something I looked forward to all winter long. When it comes right down to it, it just seems so far away. Before Génépy was born, it was a lot easier to get around – we’d just hop on a bike.

Mandalyn: What does your typical family day look like? What do you do, where do you go?

Alicia: Sundays are typically our family day. Our schedules fit like a glove right now; when he’s working I’m off, and when I’m working, he’s off. Having our own jobs and a daughter with no nanny or babysitter is a lot to handle, so Saturday is like a recovery day and Sunday is our family day.

We tend to be opposites in what we like do with our family day. Chad rests and I’m ready to go! My brain fills with all the coffee shops and bakeries I haven’t experienced. I’m thinking, We have to try this charcoal ice cream at this place! Or We haven’t been here yet, so let’s have an adventure! And Chad is thinking, Retreat! Retreat! So our family days begin with conversations about what the day needs to look like!

Chad: Usually we’ll have a little breakfast on Sunday morning and then grab coffee and a pastry at Cellar Door Provisions on our walk to church—

Alicia: We might hit up the farmers market afterward—

Chad: Then come here [to Longman OSB] for a negroni.

Alicia: We’ve also had a picnic with friends on the boulevard with our farmers market finds. Once we even brought a bottle of rosé and chilled it in the church fridge so we could drink it on the boulevard afterward!

Chad: Occasionally somebody will open up their home and cook for everyone. Then in the afternoon Génépy will take a nap at home and we’ll also nap or clean or whatever. Often there will be a gathering at night or we’ll go out with friends.

Alicia: There are also things that the city offers that have to be taken advantage of; later today we’re going to a circus in the park in Wicker Park.

Mandalyn: And Génépy goes with you everywhere?

Her first week back from the hospital we took her out to eat with us. She’s been to all the bars and the restaurants, which is why she sleeps through everything. We take her to with us to parties and everything.

Chad: It’s what we have to do since we don’t have family in town. We don’t want to pay for childcare every time we want to go out, so we have to just bring her along; otherwise we’d be doing nothing!

Neil: We tried to do the same with our oldest and found we were often alone in that. Most people get a babysitter and then go out, but it does get expensive! I like hearing that you just take her along and try to incorporate her into your life.

Alicia: I think it helps since Chad is in the bartending industry. I’ll come here [to Longman & Eagle] a few times a week while he’s working. The Off-Site Bar is a really chill environment and everybody knows Génépy here. Although she is starting to reach the age where we can’t bring her for an extended period of time without banging forks and spilling water!

Chad: But this is a part of her life now, so she feels like she belongs.

It feels like home to us, which is especially nice when I’m working my long days; they come in and it’s not like I’m going the whole day without seeing my family.

Mandalyn: What would you tell a family who is about to move to the city? Or if you could give your past self some urban family advice, what would you say?

Alicia: Come with a sense of adventure. There really are so many wonderful things in the city—and in the suburbs. For us, it’s been a challenge to break out of Logan Square. It’s a great neighborhood and we’ve both lived and worked here for a long time. The neighborhoods are one of the charming things about Chicago—you can feel like you’re living in a small community while living in the city.

It’s one of my favorite things about Chicago but it’s also one of the city’s biggest problems—segregation. There’s so much neighborhood pride, and we can be like, I’m from Logan Square or River North or Wrigleyville and just stay there. So I would say come with a sense of adventure for the sake of yourself and for others; make connections cross-culturally within your own city.

One way we’ve done this in the past is by deciding to do “intersection dates”. Just pick an intersection and explore it for a day. Like North and Clyborn. Or Elston and Division. Go and just see what is there.

“When you come to the city, come with a sense of adventure for the sake of yourself and for others.” 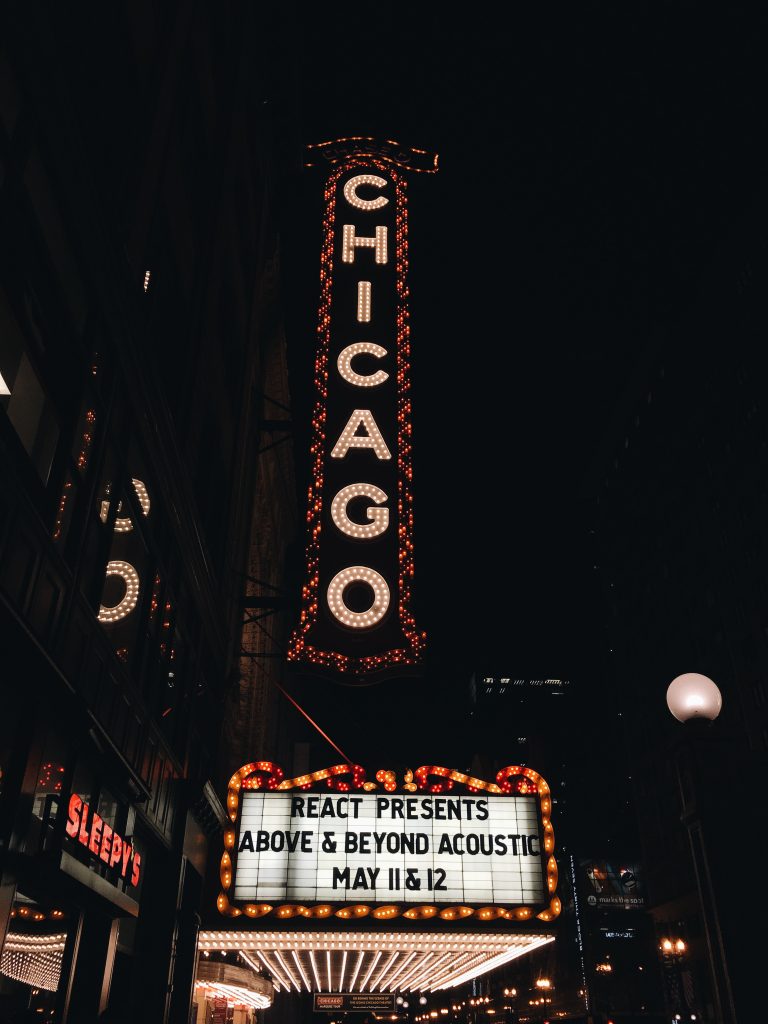 Neil: So you mean intentionally going to a place you normally wouldn’t. I like that!

Also, don’t sign up for everything right away. There is so much going on in the city! I remember moving here and having the sense of starting over with a clean slate and that feeling went away really quickly because I filled up my life and schedule with so many things.

One more thing: you have to budget so much extra time for travel when you live in the city. Keep that in mind so that when you plan something you give yourself enough time to actually do it. Yesterday we were going to a store and an exhibit, and we had to decide how to get there. Public transit takes so long, but driving means spending money on parking. So there’s a lot of time and money you have to budget for going on your adventures.

Mandalyn: That’s definitely something I didn’t see coming moving to the city. I had so much excitement when we moved, thinking I’m finally here, and I get to do all the things! but realizing how much time it takes to get to the thing I wanted to do took the wind out of my sails a bit.

Alicia: And that can encourage you to be a little more isolated and do fewer things—

Chad: And that frustration about that can leak into the other parts of your life!

Mandalyn: I really like your answer to that last question; you shared something that Chicago isn’t great at, and a practical way families can help change it: by going to places you normally wouldn’t go and crossing cultural lines with intention.

Alicia: It definitely has to be a concerted effort. There’s more to Chicago than your neighborhood, the Museum Campus, and Maggie Daley Park, although those are great places! 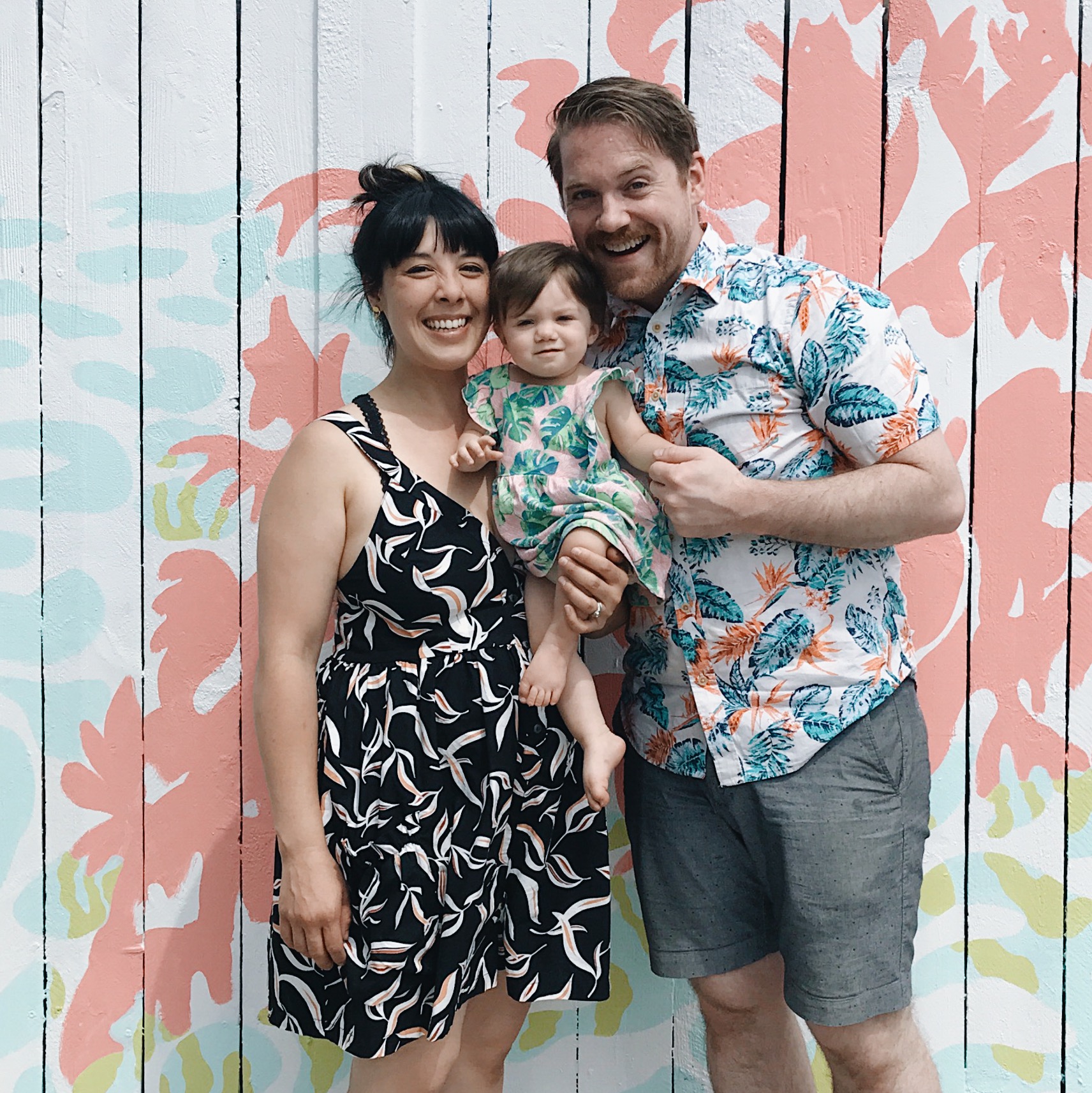 Mandalyn: What are the top 2 kid-friendly spots in Chicago?

You can follow along with Chad and Alicia’s Chicago adventures on Instagram. Be sure to give them some #cityfamilysolidarity.