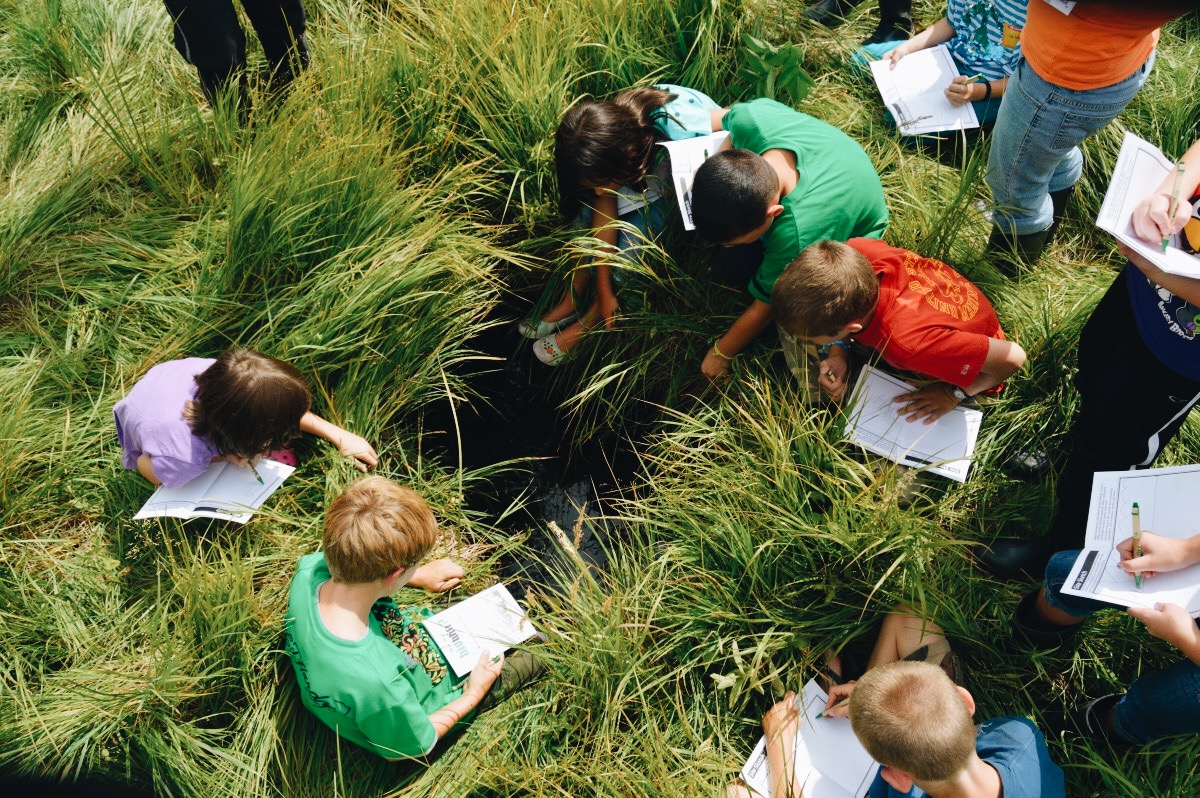 Here’s a scenario for you. It’s a sunny winter Saturday and you’ve taken the bus to the park to let the kids run off some energy. The day pack is stocked with snacks and your nature kit (a pair of binoculars, magnifying glass, notebook, and field guide) is the first thing to be unpacked. The kids have decided they’re arctic explorers and are on a mission to log wildlife sightings, so you head to the most wooded area of the park to see what you can find. An hour later, you’ve recorded five squirrel sightings, a mouse, a striped skunk, a flight of pigeons, and six other species of birds including a hawk.

Here’s another scenario. On the walk home from school, your elementary-age kid can’t stop talking about what they learned in class that day: the importance of recycling and pollution from plastic. When you come upon a pile of litter on the sidewalk, your kid is appalled and begins gathering the trash with vigor. You pull out an extra tote bag and offer to help; your cleanup mission doesn’t end until you’ve reached home and gathered two bags of litter from the sidewalks in your neighborhood. You snap a photo of your budding environmentalist with their trash stash and post to your social media, encouraging others to do the same.

Sound familiar? Both of these average scenarios are examples of citizen science experiments—the first modeled after National Geographic’s BioBlitz challenge, and the second after The 2 Minute Foundation’s beach clean.

Citizen science is exactly what it sounds like: regular citizens acting as volunteers conduct scientific experiments or research, often under the direction of professional scientists or as part of a group. It’s a fantastic way to get excited about science (no matter your age) and since many citizen science projects are local they offer a remarkable way to engage with your neighborhood and build a deep sense of connection to your city.

It’s a truly effective way to advance knowledge and gain scientific insights too. Groups of people often reach conclusions more quickly and more accurately than individuals[1], and science has always originated “from the average person’s observation of the natural world”[2]. You don’t have to be professionally trained to join a project, just an eagerness to be involved. At the very least, you’ll have a greater appreciation for the work of professional scientists and a good party story to tell (helping name NASA’s next Mars rover gets you some pretty cool bragging rights).

The next time you have a free Saturday, consider joining a local citizen science project. Better yet, get a group of friends (parents and kids) to do it with you! You’ll get a place to explore, a challenge to tackle, and a way to contribute to the important work of scientists in your city. Here are some of our favorite urban science projects across the globe.

Zooniverse is an enormous community: almost 2 million people work alongside hundreds of professional researchers to gather data and discoveries about everything from biology to climate to outer space. Use their search function to see if there are projects in your city, or browse the whole site for projects anyone can contribute to. The Hubble Asteroid Hunter, Fossil Atmospheres, and Sounds of New York City Projects look especially interesting.

iNaturalist is a popular citizen science website offering a mobile app for you to log your observations of nature. When you see a monarch butterfly in your backyard, log it and then view how many others have been sighted on your block. Your findings are shared with scientists at the Global Biodiversity Information Facility!

If you love birds, eBird by the Cornell Lab of Ornithology is the citizen science project for you. Explore bird sightings and hotspots near you and log your own observations to share with the community. Scientists use data from eBird to research and monitor species as well as to aid in conservation efforts and habitat protection.

Litterati is a global community cleaning up the planet. Download their app, upload photos of trash you find so the LitterAI can keep learning about where litter is on the globe. So far, they’ve geo-tagged 4.7 million pieces of litter! Check the map to see how much has been found in your neighborhood.

The 2 Minute Foundation operates a network of beach cleaning, litter picking and street cleaning stations across the UK and Ireland to help make litter cleanup easier. They also organize social media campaigns like @2minutestreetclean to encourage others to pick up litter even if there isn’t a station near you.

SciStarter is another log of citizen science projects, many of them available to contributors anywhere. There’s a project that tracks influenza in real time across the US (yikes), one that measures sky pollution, and one that allows communities to help investigate weather and climate change.

A real sense of solidarity comes from joining forces with other people around the world in pursuit of the same goal. We feel a little less enthusiastic about the influenza tracker, but as our favorite podcast hosts say, anything for science!