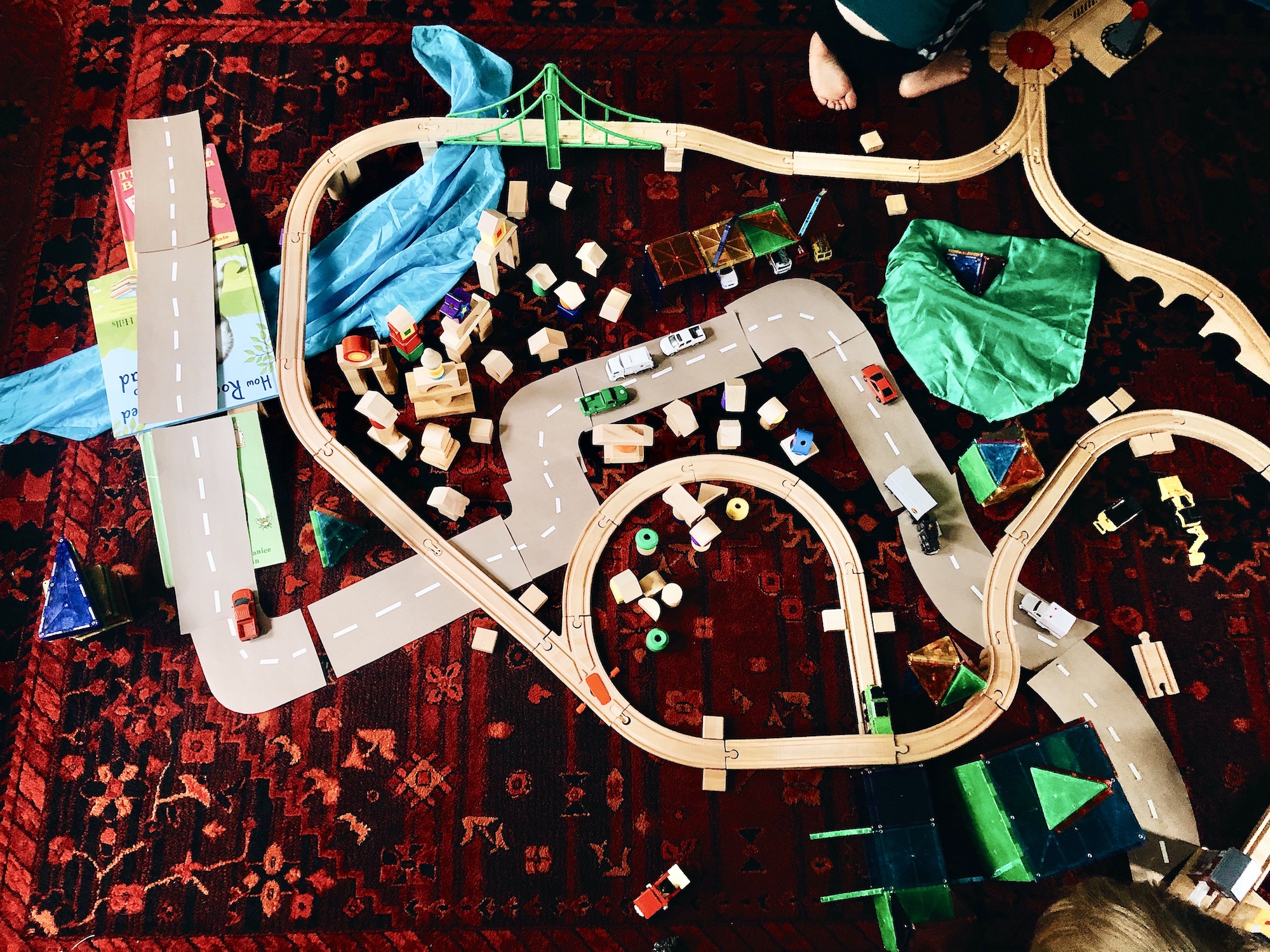 This post is part of our gifting series and features items listed in our gift guide. View all our recommendations at gifts.sidewalkclub.com including toys, games, gear, and swag for urban parents and city kids! A friendly reminder to shop at small, local businesses wherever possible. They need us this year more than ever; Amazon doesn’t.

Urban growth is skyrocketing around the globe, and one of the most surprising locations to find new city centers is smack in the middle of your own living room! The topography is just right for building to great heights and obstructions are limited (except for the occasional natural disaster brought on by a well-intentioned pet). Zoning laws appear to be quite lenient too—the only thing you may need is approval from the regional governing body, also known as your grown-up. Let’s build!

We’ve created a simple guide for budding urban planners who might need some fresh inspiration for designing your own living room city. Build on the basics of streets, buildings, vehicles, and nature to create a living room city sure to wow architecture critics around the globe!

Jane Jacobs was a famous writer who challenged designers to create cities that work well for people. She wrote that the streets are the lifeblood of the city and the sidewalks are where the magic happens. Think about it—streets and sidewalks are the place where everything happens! Start the creation of your city by planning its streets and sidewalks. Grab some reference books or look at a few city maps to get some ideas and then break ground! Lay out streets in a block-based grid using interlocking rubber roads or wooden roadways. You could also use a city play mat with roads already printed on for you, or grab some masking tape to lay out your city directly on the floor. And there’s always cardboard for the ultra-crafty! Cut sections of cardboard, draw your road, and lay end-to-end to create your roadway.

Remember that highways are nice for commuters but can cut off neighborhoods and cause significant noise and air pollution. Try designated rapid bus routes instead! If your city has other public transit or rail options like subways, this is a good time to add those in too.

What is a city without skyscrapers? Cities are known throughout the world for their architecture and design, so get creative! Use blocks, magnetic tiles, paper cutouts, LEGO, 3D models, cardboard, or a mix of everything! Create soaring skyscrapers, refurbished old buildings, movie theaters, groceries and bodegas, pizza places, coffee shops, train stations, schools, libraries, and your favorite local businesses. Oh, and don’t forget places for your citizens to live! Some people like living in high-rise apartments in downtown, some like their own houses in outer neighborhoods, and everyone likes living in a place where everything they need is close by. Which spot would you like to call home?

The world’s most beloved cities have a strong connection to nature even while being magnificent concrete jungles. Parks and green spaces help keep your citizens happy and give them a chance to unwind from a stressful day. They also provide homes for urban wildlife and help purify the air. In other words, green is good! Design some parks and plant trees to bring nature back into your city. Use play silks or cardboard to create a winding river or lake or ocean. Create pocket parks in every tiny corner you can. Do you have room for an elevated bike or pedestrian path? Can you repurpose an old bridge or train tracks? What about rail connections to nature preserves just outside your city?

It’s moving day! In roll the moving vans and delivery services along with fire trucks and police. Taxis are stationed at the airport waiting for passengers getting off the plane, and the subway stations fill with trains and riders. Busses begin their routes while food trucks drive across the city to sell their treats, passing street sweepers and sanitation workers hard at work. There’s also a construction site or two, because this city just keeps growing! Lastly, add in personal vehicles, bicycles, scooters, and any other mini wheels you might have. Will you have toll roads to limit congestion in your city? What about a passenger train station to connect to neighboring cities? Your living room city is becoming a bustling place!

As you can see, living room cities are full of opportunities and each one turns out a little differently. Building your own can help you see features of your own real-world city when you’re out and about, and it’s just plain fun! Send us a picture of your city if you think of it; we’d love to see what you create!