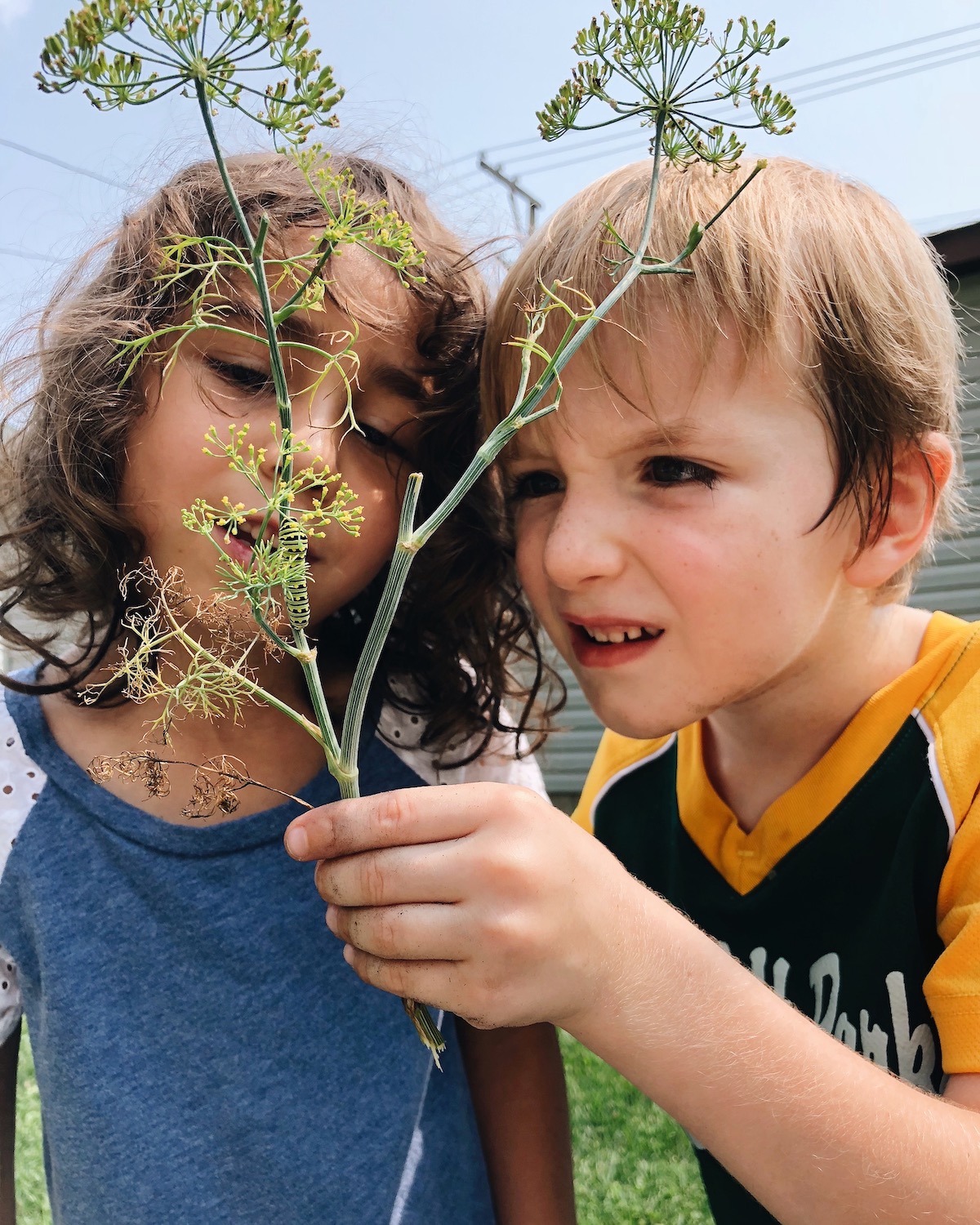 Life in the city has a wealth of perks and good things for families: playgrounds, restaurants, arts and culture, public transportation and the ability to live a car-less lifestyle. But there are sacrifices to be made too, and doubts about urban lifestyle can arise from time to time. Many urban parents worry that their kids aren’t getting enough exposure to nature.

Study after study has been published attesting that time spent in green spaces, exploring untamed areas, and playing or interacting with the natural environment helps kids feel less anxious, think more creatively, and be just plain healthier. There are numerous green spaces and parks in the city to give kids those experiences, but parents often wonder if it’s enough. Does the nearest playground, a tangle of metal bars and plastic climbing structures arranged on a rubber pad qualify as nature? Are visits to the large parks in the city enough for kids to build a connection with nature in spite of being surrounded by stone walls or iron fences and peppered with DO NOT STEP ON GRASS signs?

At first glance, our urban environments seem disconnected from nature. But ask Nathanael Johnson and he’ll say the opposite—the key is taking more than a quick glance.

Johnson is a journalist and father in Berkeley, California. When his oldest daughter was about a year old, she began to play the asking-incessant-questions-about-the-world game. Isn’t it fascinating how every small human comes programmed to know how to play that game? Josephine would ask him to name the trees, the bird flying above or pecking at their feet, the sky. In this way, Johnson came to see his urban environment a bit more carefully: where Josephine saw a tree, he noticed a tree peppered with tiny yellow blossoms, and being a journalist, he began to take notes (literally). Their walks through their city became little nature studies, and Johnson developed an awareness of countless signs of natural life in the midst of his urban neighborhood. All these notes became a book: Unseen City.

“All around you,” Johnson writes in its pages, “is a densely interconnected web of nutrient exchange, competing interests, and cross-species communication. There’s an invisible world right in front of our noses, ready for exploration”—yes, even in the city! What Johnson had previously considered to be a concrete jungle—“nondescript city blocks,” in his words—were actually bursting with life.

Unseen City helps us see the magic in our urban spaces too. It’s not magic, actually, it’s just reality. But it’s a reality that is often just under the radar of our conscious observation, and sometimes it takes a little prodding to help us see it.

Each chapter in Unseen City investigates common wildlife found in cities and delivers fascinating information about the behaviors of these urban creatures. Did you know pigeons were originally cave-dwellers? That explains why they’ve adapted so well to living in cities—there are plenty of nooks and crannies for them to roost in the facades of buildings. Squirrels have also adapted to urban life; they’ll eat anything (even pizza slices) but still prefer nuts and some scientists think they have a mental model of all the nuts they’ve ever buried. Take note, map-makers. Ants are another species unfazed by urban development. They can survive and forage for food almost anywhere, even your freshly-scrubbed kitchen. And one more fun fact: did you know there are many species of wild plants (aka weeds) growing throughout our cities that can be foraged and—wait for it—eaten?

In order to discover all these fascinating facts about the urban wildlife he was encountering, Johnson took a natural and simple approach. No memorization of guidebooks—that would have been to dull and uninspiring. Instead, he opened his eyes a little wider to the nature that already existed all around him in his city, and let his natural curiosity guide him.

That meant noticing a pungent smell on one particular block on the walk to a coffeeshop, following his nose (literally) to a tree that was producing the odor, and taking home a few leaves to research what it was and why it was so smelly (it was a female gingko. He discovered the trees have distinct males and females, have been on the earth since the era of dinosaurs, and yes, the seeds are stinky.).

Following our curiosities is one of the best ways to learn, and it serves the purpose well for those of us who aspire to get a bit more in tune with nature in our urban spaces. Johnson calls himself a “neighborhood naturalist” and takes the idea to another level by asserting that “if people start paying attention to the organisms that are thriving, unseen, among us, [it] will change us for the better: On the political scale, we’ll become more realistic and effective in our efforts to protect the environment; on the personal scale, we’ll be happier and more full of wonder.”

In Unseen City, Johnson gives a few practical tips for embarking on exploration and discovery of our natural environment. While he stresses that neighborhood naturalists don’t need anything except wide open eyes, there are a few useful tools that can make the process more fun for the kids (and the grown-ups, let’s be honest).

A magnifier, in the form of a magnifying glass or a more powerful hand lens can transport you to the world of the ant or caterpillar in your backyard. We have a cheap plastic magnifying glass that offers barely any real magnification, but each time we bring it on our walks through the ‘hood, each plant and bug is inspected with great enthusiasm! Choose one that’s not too breakable and a good fit for small hands. We also have an inexpensive loupe that’s no bigger than a keychain. It’s only $6—not so precious that we need to worry about bumps and scratches and the 5x magnification is enough. When we’ve unlocked higher levels of naturalist expertise, we’ll get a nicer model similar to the ones jewelers use.

Binoculars transport you into another world too—a world that’s a bit farther beyond reach. Use it to look closely at birds you see congregating on the telephone wires or investigate a squirrel’s drey (nest) high in the trees. We have a cheap pair from the zoo gift store that don’t offer much by way of clarity or magnification, but they’re a prized possession to our 6-year-old. There are limitless options (and limitless price points) for buying a pair, but before you do, ask your friends or family if they’ve got an unused set collecting dust somewhere.

Guidebooks are also highly valued in our house and often hoarded under pillows and in backpacks “because I might need it later.” They’re invaluable little identification tools, especially if you find one for your particular region. The internet is a wealth of information, but as Johnson says, it’s easy to get lost when the entire animal kingdom is just a search bar away. Here are some of our favorite guidebooks by region. We’re especially fond of the pocket-size ones—they’re perfect for little hands and stuffing in pockets. Be warned, the readers in your house will probably become talking encyclopedias spouting off nature factoids.

We’ve also downloaded nature apps to help us when we’re out in the city and don’t have a guidebook with us. The National Audubon Society has an app called Audubon (iOS and Google Play) that lets you record your own bird sightings and share them on the app’s public database. You can also use it to identify an unknown bird species by entering its descriptors. iNaturalist (iOS and Google Play) uses image recognition to identify plants you take a photo of. It also utilizes a public database so you can log your observations and share with the community.

Keeping a journal is a nearly universal habit of naturalists and nature enthusiasts everywhere. Take one with you to jot down questions that spark your curiosity, tuck the leaves of an unknown week inside its pages, and sketch (no matter how elementary your drawing skills) interesting things you see. All these things help beef up our awareness muscle, and when it’s as strong as it can be, we’ll turn wide eyes to a world of discovery.

Johnston also recommends “finding a rampant weed you love (to eat).” “There’s something about plucking a few leaves to garnish a dinner or chew as I walk” he says, “that reframes my sense of place in the warp and weft of interspecies relationships around me.” Yes, he’s waxing philosophical, but we get the point—placemaking is important, and finding a weed to enjoy over and over connects you with your own corners of nature in a remarkable way.

Start small with your efforts to see and appreciate the natural world growing and thriving in the midst of your concrete jungle. It can be as simple as a nature walk just after dinnertime. Follow your curiosities, ask questions, and slow down enough to take the time to observe. For many of us, that means putting away our phones and trading bluefacing for a bit of eye-opening and wonderment.

“Life only becomes interesting when you watch it closely enough to see something surprising, and with that surprise come a little closer to the real thing. That,” Johnson writes “is the point of [my] book: to allow people to see past their expectations. When actual seeingpierces the skin of [habit…] it permits a bit of wonder to bleed through.”

If we look at our web of sidewalks, skyscrapers, wrought-iron fences, elevated subway tracks, and highway overpasses expecting to see no sign of natural life, we probably won’t see any. But when we actually look? There’s a high likelihood we’ll be proven wrong. Nature has adapted to our urbanism in many ways. It’s only fair to adapt to it, or at the very least, notice and appreciate its versatility and resilience.