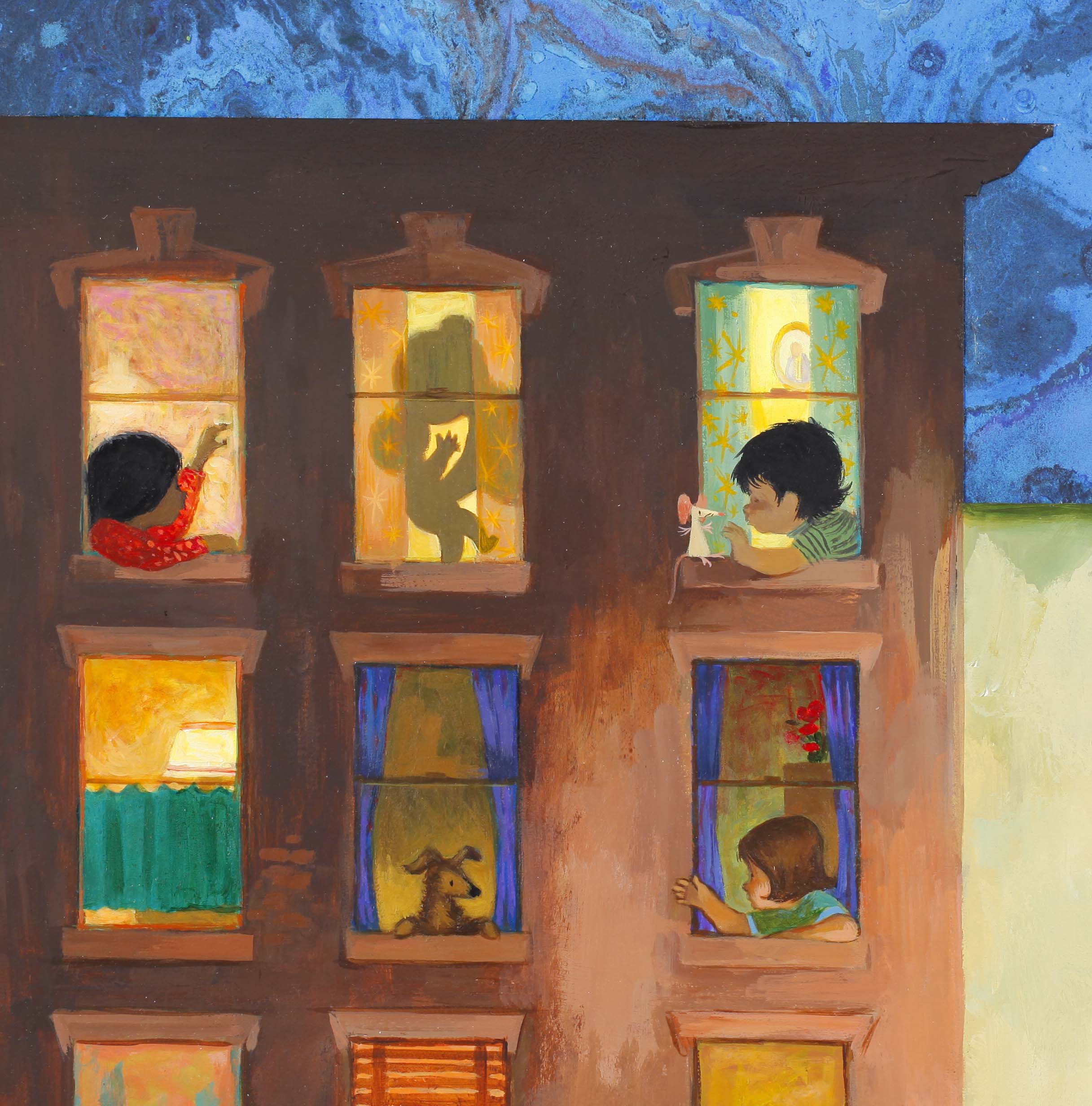 I’m sure you know by now that we’re obsessed with life in the city. We love the sounds on the sidewalk at rush hour, the whoosh of wind from the subway, the sights, the museums, the people, the flavors, the colors. And we love finding books that feel the same way about the city as we do. Reading urban stories helps us see the story and the beauty in our own urban lives.

Here are a handful of our most favorite picture books that celebrate city life. Some of them address urbanism head-on with descriptions and explanations of how our cities are built and function, and others are fictional stories set against the backdrop of the sights and sounds and warmth of the city. They’re beautiful and exciting stories and they sound like home!

Maybe you’ll find a new family favorite in this list.

Roberto is a boy in Brooklyn who can’t seem to get to sleep. Dreams is the story of what happens out the window of the brownstone where he lives on that summer night—or did he dream it? Ezra Jack Keats’ dramatic and colorful paintings pair with his words to create a beautiful experience in this book.

Lift the flaps in this beautifully illustrated book by Lonely Planet Kids and find out the nuts and bolts about your city! How Cities Work is crammed with information that every kid likes to know: what’s inside those high rise buildings, and what’s underneath them? What goes on in city hall? Where do the manholes lead?

Follow Ángel’s creative dream to turn a bleak wall in his neighborhood into a masterpiece of community and togetherness. Susan Verde has written a classic in Hey, Wall! and the illustrations by John Parra are exceptional.

Another magnificent story by Ezra Jack Keats (and no, this isn’t the last time you’ll see his name in this list!). Follow Sam as he explores his apartment building to find the source of an intriguing sound. It’s not the barking dog, or the voices talking, or the snoring, but something else and it’s coming from Apt. 3.

The world is full of fascinating cities! Discover 86 of them in The Cities Book by Lonely Planet, and just try to not get wanderlust while you’re reading. Find out which city has a museum shaped like a shoebox (Toronto), where to see a replica of the Parthenon (Nashville), and plenty of other silly and incredible facts in this great book.

Yes, another award-winning story by Keats. Peter walks through his neighborhood after the first snowfall of the year to find ordinary magic with his neighbors and friends. First published in 1962, The Snowy Day was one of the first picture books to portray diversity, multiculturalism, and a realistic urban setting. It is thought to be the forerunner to many books of the same kind we love today. Read it over and over and then watch the short film based on the story too!

This wordless picture book could be a scene out of our own life: a little girl collects wildflowers growing almost unnoticed as she walks through the city with her father. Sidewalk Flowers is a testament to just how observant children are, and how they’re so good at finding little bits of beauty that we grown-ups sometimes miss!

We didn’t think we could love public transit anymore, and then we found this book! “Every day, millions of Zoomies move around the city using Zoom’s public transit system.” Travel along in The Way Downtown! The imaginary city is full of things that you and your family probably encounter every day in your city.

Read Last Stop On Market Street just once and you’ll understand how it received so many awards. CJ rides the bus with his grandma each Sunday after church and she meets each of his questions (some of them are deep for such a young boy!) with wisdom and grace. Matt De La Peña effortlessly speaks to the beauty of the city’s bustle and the magic in sometimes overlooked neighbors in this favorite picture book.

Another wordless picture book, Imagine! follows a boy on his skateboard all the way to the art museum where he encounters masterpiece paintings for the first time. The paintings come to life and join the boy on adventures through New York City! Raúl Colón has created a masterpiece himself in this book.

Take your questions about how cities work to the next level with 25 projects in Cities that help explain urban ideas. Create your own city planner board game, learn how skyscrapers are engineered and create one yourself, and build an aqueduct to learn how cities are supplied with water. You just might be raising the next urban planner or mayor!

Creating a subway map for the 6 million riders in New York City is no simple task. The Great New York Subway Map tells the story of Massimo Vignelli, the great designer who created the 1972 map with the help of his design team. Today’s map still uses many of his ideas! A perfect book for kids and their design-forward parents.

We love everything by illustrator Christoph Niemann. Subway is one of his many tributes to New York City, and this is what he says about the subway: “Underneath the city is this beautifully simple system of letters, numbers, and colors. The trains and stations are huge and impressive, but also comforting, because nothing ever changes.”