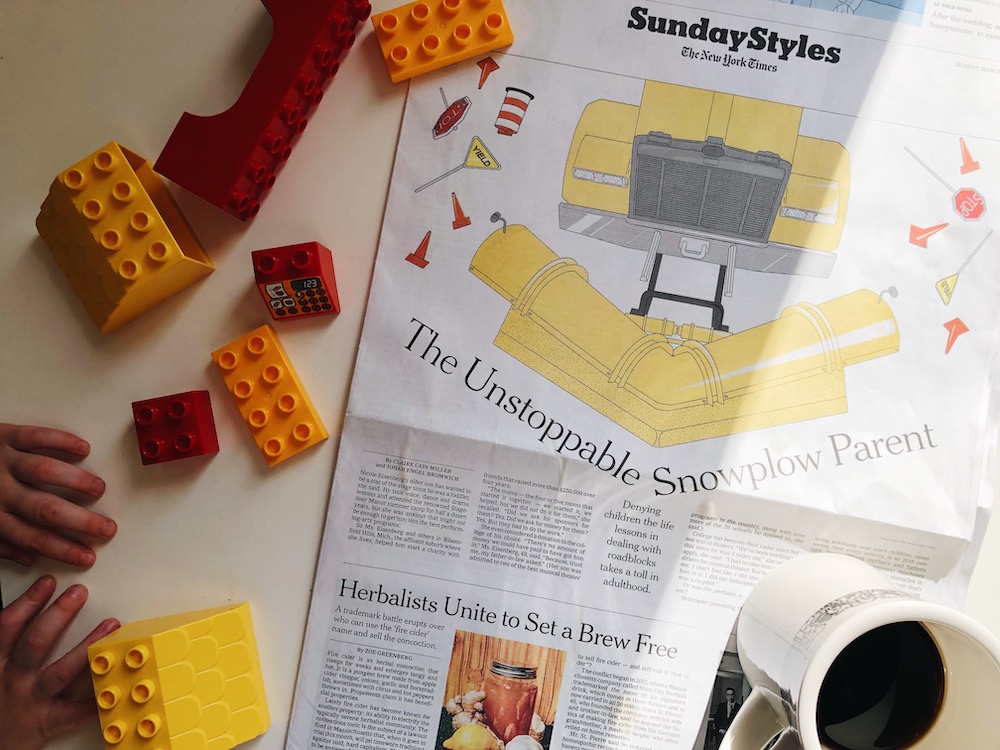 The New York Times published an iconic follow-up OpEd a week after the news of the college admissions fraud broke titled How Parents Are Robbing Their Children of Adulthood, profiling the celebrities who broke the law and parents who are less wealthy and seem familiar enough to be our neighbor. Modern parents, the article poses, “are more like snowplows: machines chugging ahead, clearing any obstacles in their child’s path to success, so they don’t have to encounter failure, frustration or lost opportunities.” These parents plow a path for their kids with the best of intentions: to help them meet an important deadline, for example. The problem arises when parental intervention becomes the norm and kids forget—or never learn—how to make deadlines on their own.

Parenting is a sensitive subject; we’re all trying our best to raise small humans into kind, empathetic, resilient adults. If clearing the path of every obstacle or difficulty is counterproductive to growing strong, resourceful kids, what’s the alternative?

Jessica Lahey, English teacher, columnist, and author cautions against overparenting and argues that her happiest and most successful students have been those who “were allowed to fail, held responsible for missteps, and challenged to be the best people they could be in the face of their mistakes.” In her book, The Gift of Failure, she encourages parents to resist evading failure for their kids. They’ll feel incompetent, unworthy of trust, and will be unprepared for the times when failure does happen.

As honest as it seems to just give our kids a helping hand, there have always been skeptics of overprotective parenting and outliers who encourage free-range childhood and unsupervised play. Hanna Rosin is a contributing editor at The Atlantic and wrote a powerful article in 2014 about The Overprotected Kid. She documents her experience following a group of kids (including her own) around an unorthodox playground in North Wales called The Land. It’s hardly a playground though; there are no slides or prefabricated plastic equipment and the only swing is a frayed rope swing across a creek. There are trees to climb, wood pallets and crates to rearrange, a few discarded chairs to climb on, and fires to light.

The playground (if we can even call it that) is based on the premise that reasonable risks are good and healthy for kids as they grow and develop. Rosin thinks we need a cultural shift in our parenting. “There is a big difference,” she writes, “between avoiding major hazards and making every decision with the primary goal of optimizing child safety (or enrichment, or happiness). We can no more create the perfect environment for our children than we can create perfect children. To believe otherwise is a delusion, and a harmful one; remind yourself of that every time the panic rises.”

Giving our kids experiences that are more self-directed and less micromanaged can be a powerful way to give them space to develop creative thinking and original thoughts. The results of a study published in 2011 indicate that while intelligence is increasing (higher IQ and SAT scores and the like), “creative thinking is declining over time among Americans of all ages.”

The study isn’t all bad news though; the authors also give some simple ways to help our kids develop creativity. Free, uninterrupted time for children to engage in knowledge building on their own builds creative fluency along with finding problems. After all, creativity is essentially solving problems.

It looks like snowplow parenting is the lastest developement in unhelpful parenting styles, and it’s actually pretty ingrained in our cultural push for excellence and achievement. Fighting against it may seem like swimming upstream at times, but I have no doubt that we’re up for the challenge. We’re taking about our kids, after all. We’d move the moon for them if we could, so giving them space to fail, to take risks, and to flex their creative muscles seems only natural.