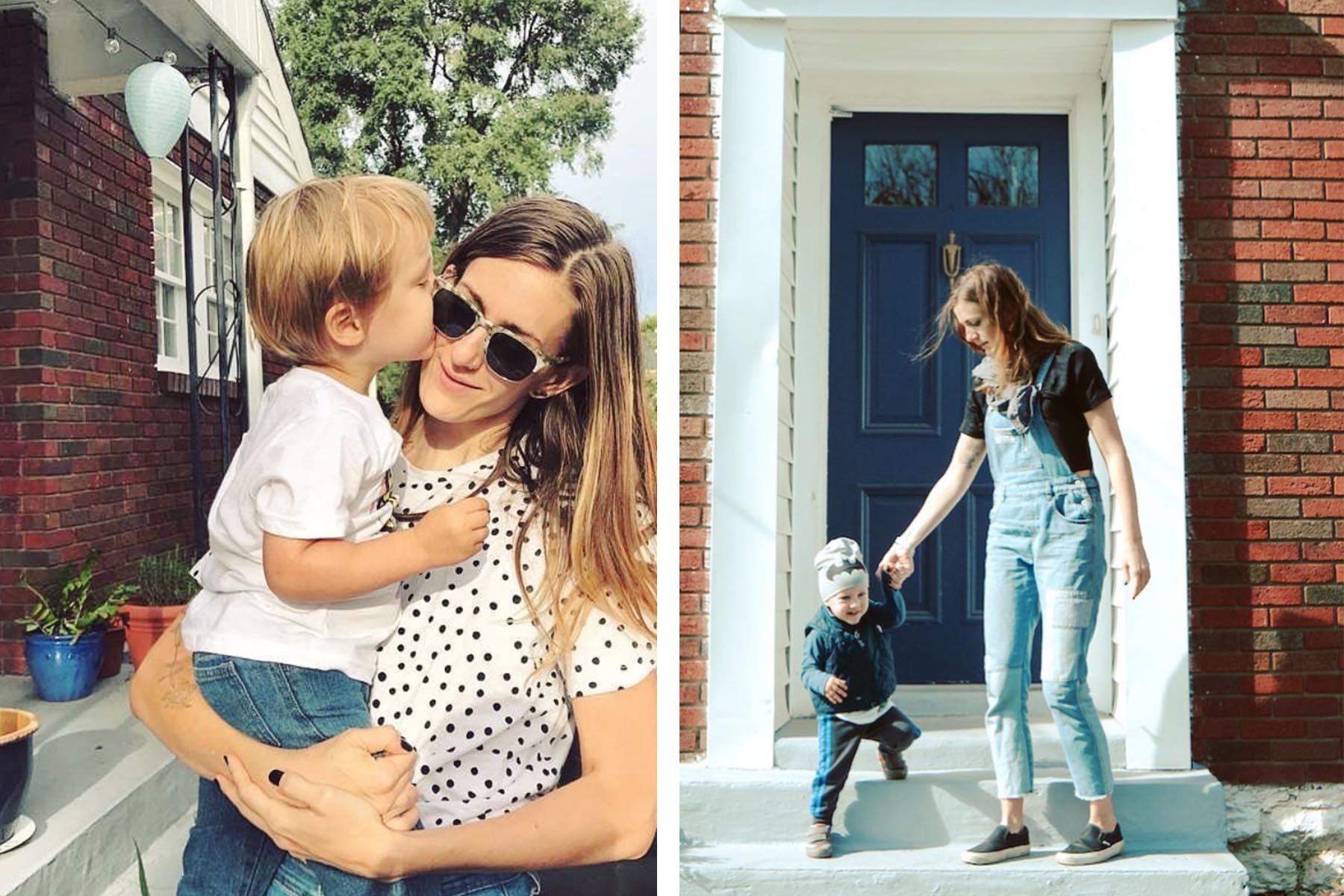 Amelia lives with her son, Silas, in East Nashville, Tennessee. Amelia is the senior editor of parenting at SheKnows and you can find her work at ameliaedelman.com. Silas is 3 and is currently obsessed with drawing, drumming, and outer space.

They moved to Nashville from the largest city in the US a few years ago and shared the thought process behind making such a big decision, how they settled on a new home, and what it’s like to transition to a much smaller city. We think you’ll love their story.

When did you move to Nashville, Amelia?

I grew up in the Bronx and lived in all of the boroughs of NYC at one point—except Staten Island. After living there on and off for 30 years, I was finally priced out of my own hometown, which was so sad!

The circumstances that brought us here to Nashville are what I think happens to a lot of people in New York City and San Francisco. I finally realized the NYC cost of living just wasn’t sustainable for me long-term. My partner at the time and I were both busting our asses to have good careers, but still barely making ends meet.

We just began to wonder, Why can’t we make it work in the city? Is it because we have a kid now? Is it city life in general? Why are we struggling in a one-bedroom way out in Bed Stuy with two incomes from good, solid jobs?

So much of my time was spent commuting. Our apartment was nice but so small that there was literally no space for a crib for Silas. It was just tough. I don’t know what was the last straw, but soon after Silas was born I slowly started researching other places to live.

That’s such a big decision to move away from your home and go somewhere entirely new. How did you decide where to go?

We just started hopping around to different cities—acted like tourists to figure out other places to live.

We looked at cities that seemed significantly cheaper, but still had plenty of culture and things I’d grown accustomed to in NYC. I didn’t want to move to a city that didn’t feel like a city.

And you had the option to go anywhere?

I told my job at the time that I was going remote, and my partner worked for himself, so we had freedom to really pick where to live. We visited, researched, and made a list. The finalists were Minneapolis, Boulder, Austin, and Nashville—and Nashville won. To be honest, it was somewhat of a consolation prize; the city I really wanted was an affordable Brooklyn, and that’s East Nashville for sure.

It’s so funny how similar it is to Brooklyn: it’s east across the river from downtown Nashville, and it’s where the artists and writers and musicians and bartenders all congregate with our babies and our vegan food and our pour-over coffees (haha). It sounds stupid but it feels like home to me — and it’s such a great community vibe.

We’re in the neighborhood where the artists and writers and musicians and bartenders all congregate with our babies and our vegan food and our pour-over coffees (haha). It sounds stupid but it feels like home to me.

But East Nashville has way more accessible green space than Brooklyn, the people are nicer (I actually know and hang out with my neighbors now?!) and it’s SO much cheaper. The mortgage on my 4-bedroom house is less than my monthly rent for that shoebox apartment in Bed-Stuy. Silas’ dad and I have since split up, but Silas and I have now been in East Nashville for over two years, and it’s definitely our Brooklyn now.

Why did you decide to move to another city? Is there something about city life that you just couldn’t bring yourself to leave behind?

I lived in New York City as a kid, so I really can’t imagine what it would be like to be a little kid in a non-urban area. I lived in the ‘burbs in high school, which I hated, and the most remote place I ever lived was Saint Andrews, Scotland. Even there, I was still able to walk everywhere. The concept of not being able to walk the places I need to go is awful to me.

So many things I need are within walking distance in our neighborhood, and there’s even more within biking distance. I biked a ton in Brooklyn and I’m happy that I get to bike here too. I had to re-learn to drive when I moved to Nashville, and I had never owned a car before.

Did you consider a suburb of NYC to stay closer to your hometown?

I’ve never been drawn to the suburbs because it doesn’t seem like there is a strong sense of connection and community or a vibrant social life there. When I visit the suburbs I feel really disconnected, and I just didn’t think I’d be happy with a lifestyle that was so different than what I knew in NYC.

Nashville is much smaller than New York City. Does it feel much different?

It’s definitely different than New York. We’re well within the city limits of Nashville, and here that means we have a single-family house and a small yard. I’m like, that’s city life?! I’ll take it.

I think small cities are incredible, and they’re growing for good reason. They have culture and vibrancy and diversity and things to do and places to walk to, but then you come home to a small yard or a garden and your own space. It’s like you get the best of both worlds.

The other impressive thing about living in a smaller city is that it feels possible to do everything. For example, Nashville has like three art museums, period. I try to go to every new exhibit at the Frist. And that means I see so much more art here than when I lived in Manhattan, where there were museums and galleries around every corner! Because I’m not totally overwhelmed by the options. I go to more plays and performances here. It’s just more accessible. And there’s way less FOMO.

Does city life ever feel like survival mode for you? Or have you always thrived off an urban lifestyle?

Basically Silas’ whole life in Brooklyn was survival mode. I was so lucky—I got 3 months paid maternity leave, but it was the middle of winter and I just felt so far away from my friends and the things I wanted to do.

There were also moments in Brooklyn when we were in the midst of survival that I felt so badass. I remember one particular day: I was taking the train into Manhattan to go to Silas’ pediatrician’s office and the A train was so crowded. Silas started crying on the train platform and I just opened my coat and started breastfeeding him while standing up—on the A train—for like five stops. I was like yeah, I can do anything.

But at a certain point it’s like, do I want to be breastfeeding my newborn standing up on a packed smelly train? Not really.

What do you do on the weekends with Silas?

We do a lot of drawing, playing, putzing around in the yard, going to playgrounds, or we’ll go to a museum or the library storytime. I also have no qualms about taking him out to dinner or to a rock concert (he wears his headphones!). Often on weekends we’ll all go out to an early dinner at a nice spot. So many places are kid-friendly and if we go a little early we never have to wait.

We’re huge fans of taking our kids to restaurants!

Yeah, it can be done! And traveling too. Silas has been on maybe 30 flights? He’s been to Iceland, Mexico, all over the U.S., and we just got back from Morocco.

I was never sure if I wanted to have kids. I was nervous about it, and at one point I realized that everything I was nervous about were things within my control. Like eating out and traveling. Now I’m the person who tells everyone that having kids — at least one, at least mine — is so much better and easier than I thought. So many people give the message that parenting is the hardest job, and it’s certainly stressful, but it’s so much easier for me here than it was in NYC. And I’m saying that as a single mom now, so that means something!

It sounds like you’ve found a fantastic city and are making a wonderful life in Nashville.

I feel like I lucked out picking this city at the time we moved here. Nashville is ever-expanding; this also includes gentrifying, which can certainly be problematic but is also fascinating. I’m just happy to be along for the ride.

When is the best time of year to plan a visit to your city?

Fall in Nashville is MAGIC. You get leaf-peeping the likes of New England’s, plus it’s 72 degrees on Thanksgiving like in L.A. So many wins.

Follow Amelia and Silas’ Nashville (and travel) adventures on Instagram and you won’t be sorry. They make the most adorable pair.