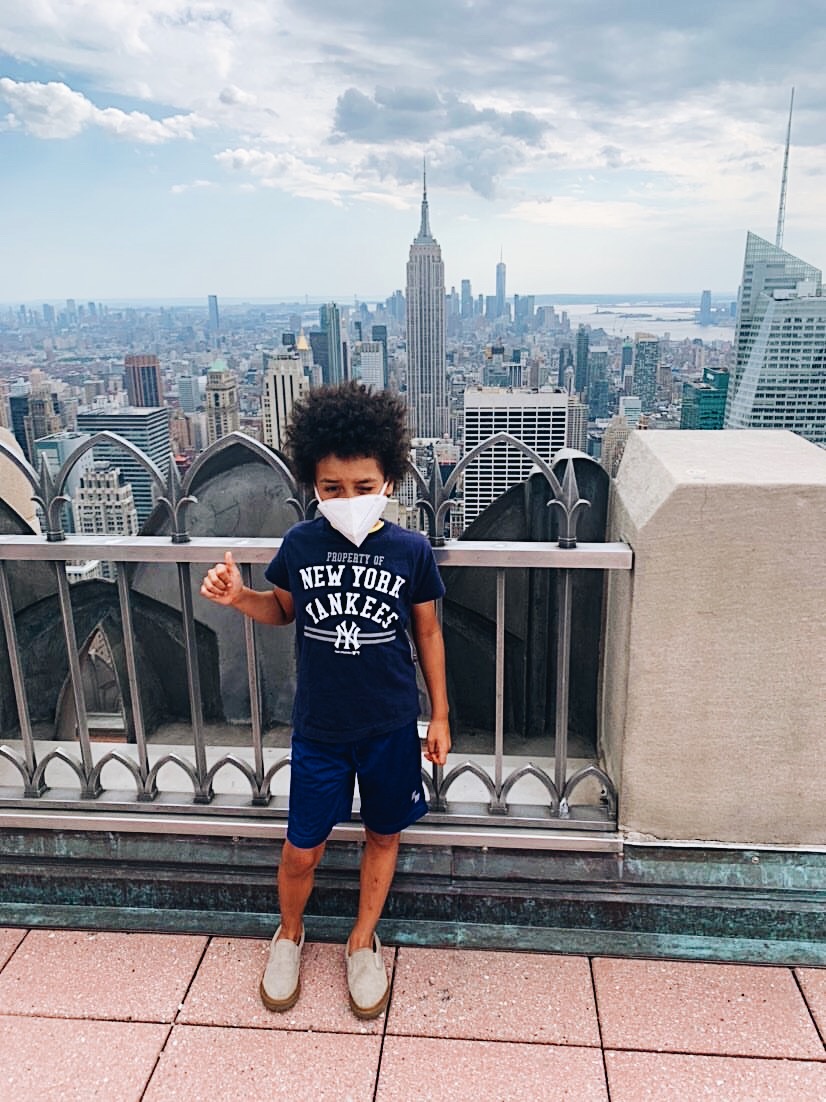 Diana is raising her son in the same city she was born and raised in—New York! She’s known online as NYC’s Mamí on the Move and that’s not just a catchy name. These two can move. Diana shared her love for city life in this interview, including her honest take on the pandemic’s effects on their ability to take adventures. Like many of us, she’s reminding herself that this too shall pass!

Introduce us to your family and your city! Where do you live, and how long have you been there?

My name is Diana and I was born, bred, and raised in NYC! I grew up in OZ, which is local speak for Ozone Park, Queens. I’ve spent time in East Harlem and Canarsie, Brooklyn and am now back in Queens in Lindenwood with my 9 year old son, Jason Germain.

New York is something wonderful. How would you describe your city?

Call us The Big Apple or the Empire State or another of the many nicknames for New York City, but I like to say we’re the most popular city in the world! I’m pretty sure everyone has heard of New York City. The five boroughs of our city are packed with about 10 million people—it’s an incredibly dense city. To compare, the rest of New York State has approximately 9 million people sprawled throughout! NYC is as urban as you can get and we love living in this amazing city.

I know there are so many things to do in your city; what are some of your favorites?

NYC is known for entertainment and art and lots more. You can find us catching a show on Broadway, running the town in Times Square, shopping in Soho, window shopping on 5th in Midtown, watching the tree light up at Rockefeller Center during the holidays, kicking it with the Rockettes in Radio City Music Hall, climbing up to the top of Chrysler Building, skating through Central Park, catching a game at the Garden, setting sail along the Hudson, walking the cobblestones of South Street Seaport, attending showtime at The Apollo, taking in the art at The Met, saying hi to Santa at Macy’s Santaland, throwing our lighters up for the Statue of Liberty, or commemorating those we lost in 9/11 at the World Trade Center Memorial.

Yes, there is a lot to do in our city!

It sounds like life in NYC brings you a lot of joy! What is the main reason you choose to stay in the city?

I can honestly say that for most of my life I have felt like I was thriving, especially after I had my son and was finding entertainment for him every moment of the day (except for when he was sleeping, ha!). I have realized that living anywhere else would put me at a loss for what to do with Jason!

I love being able to get up and go. We can get anywhere in the city on public transportation and there’s always something to do. I used to be on the MTA daily in the summer or at least five days a week.  If we didn’t take the train we were in the car, usually headed to places without access by train. Trains were my best friends—even the NJ transit and Path trains once in a while.  I have slowed down taking public transportation and we are riding the trains to Manhattan once a week nowadays.  I love the trains bc they go basically everywhere you want to go in Manhattan and to most areas of Brooklyn; most of the action is in those two boroughs.  It’s quicker than by car and you don’t have to worry about finding parking or paying for parking or any of that other stuff.

We are never at a loss for fun. This search for activities in my city and the joy it brought me is what prompted me to create my social media accounts to help other parents do the same with their kids.

Has there ever been a time when you felt like the city wasn’t made for you? Like you wish you lived somewhere else?

Ok, let’s be honest. If you asked me this a year ago, I would tell you I was made for NYC, 100%. I felt so strongly about living here—as if it was my calling! Recently I’ve been doubting that. I’m not sure if it’s because of COVID or what, but I’ve been having these feelings like I was born in the wrong state!

Maybe it’s the cost of living and wanting a house of my own that makes me feel this way. I also find myself wishing for a seaside life—maybe that’s because it’s summer. Sometimes I even feel like moving to the mountains, far away from the city.

I’m feeling all of those things right now and I’ve thought about moving elsewhere through the years—Hollywood, Miami, the Jersey Shore—but have yet to get up and go. If I ever do move, it will probably only be to our neighboring state of Jersey, so I can be close to both the city and my family. It’s probably just a phase though; I’m sure these feelings will pass.

I have heard from so many parents who are feeling the same things, so you’re definitely not alone. The pandemic has made us all feel stuck and causing us to question city life.

Any time I travel to a non-urban area, like the suburbs, or a rural community, or to mountains, I get a feeling of happiness and fantasize about what it would be like to live there. The grass is always greener on the other side!

A change of scenery from the city is nice once in a while, even if it’s just for a day trip.

Have you made any sacrifices for city life over the years?

I would say I’ve made many sacrifices for city life. I would love a big, beautiful home with a huge restaurant style kitchen and yard, but I currently live in a tiny apartment with an economy sized kitchen and no yard. Maybe one day that will change and I’ll find a gem of a home in the city!

The sacrifices of space are definitely real! What have you gained by living in the city?

I got a fantastic education at the business and fashion college LIM and a fulfilling life in the entertainment industry. I’ve been a background dancer on MTV Jams and BET specials, and my son Jason has appeared in children’s music videos, in newspapers, on the news, in commercials, and so many other opportunities we wouldn’t have if we didn’t live in NYC.

After I created NYC Mamí on the Move, parents dubbed me the best activity guru in NYC (and beyond)! I’ve met some of my closest and best friends because of NYC MOTM; some great, like-minded people, sharing my interests and lifestyle and who have taught me so much.

What advice would you give to someone who has recently moved to a city or is considering a move?

If you’re a parent, join parenting groups of interest. Study a map and the transportation system.

You can always find a job in NYC if you have the right qualifications. There’s never a lack of things to do, and you’ll always be able to find someone you can connect with in this melting pot city. The competition in the city can be a challenge, and it touches everything: career, money, house, cars, schools, gifted & talented programs—everything can feel like a competition.

My strategy is to just “keep it movin” and do what I do: finding the hottest spots for infants, tots, tweens, teens and everything in between! I love sharing my city with the world.