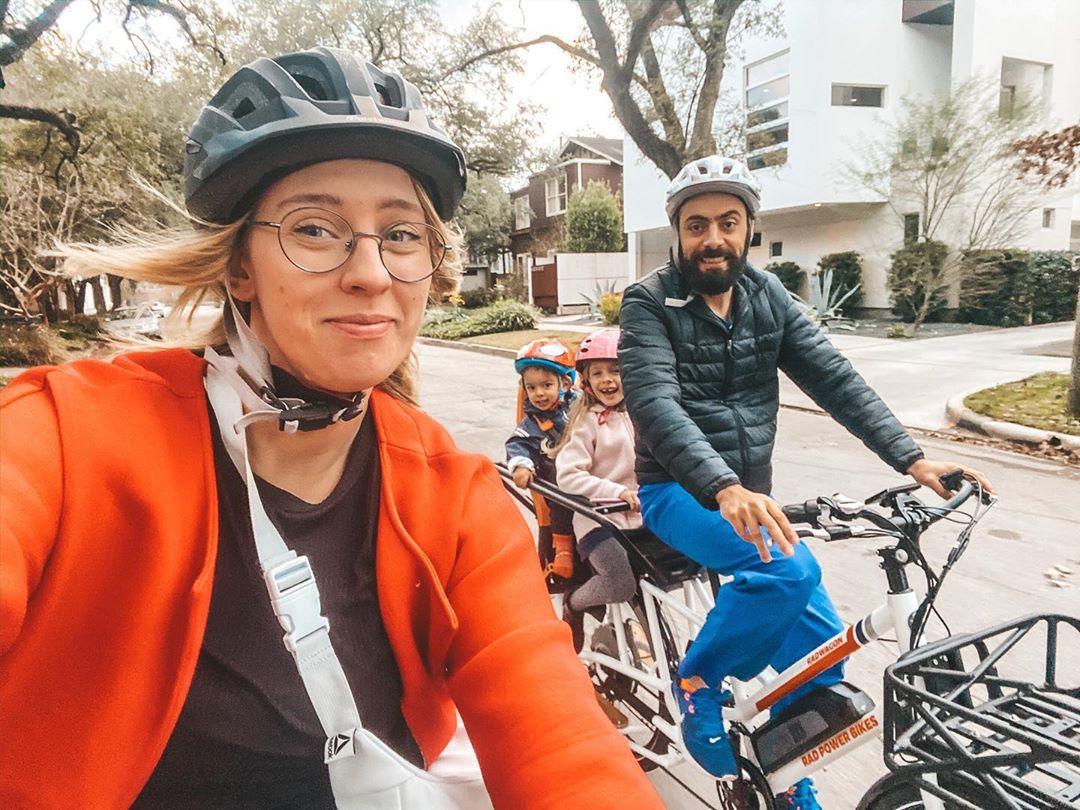 Patrycja lives in Houston’s loop with her husband Ibrahim and their two kids, Miral (6 years old) and Felix (2.5 years old). They value multiculturalism and diversity to mirror their own family and find joy in seeing the city by bike!

They’ve lived in Houston for only a few months but it already feels like home. Patrycja is delighted to have proved some friends and family members wrong about city life with kids! Read on for more about this positive-minded family and their beautiful city.

Houston is so multicultural! There are lots of things to do, the city is family friendly, and there’s a great verity of different food and restaurants. The city of Houston feels so fun to me. There’s a zoo in the middle of the city, we have beautiful parks including a huge preserved park in the city that has the feeling of wild-ness, and we have incredible museums. The options are so great! Oh, and there’s so much art!

Because we have such good weather, there are lots of outdoor activities for everyone: dog lovers, families, and older people. Unfortunately the weather in the summer (June-September) is killer—it’s unbearably humid and hot. But from October to May you can enjoy the outdoors!

Houston is a big city. There’s a huge medical center and university here, which makes the city feel so alive. It’s very sprawling, but I only stay in the loop of the city. The other concern is that people of Houston city should push more for more bike lines. It’s mostly ok but sometimes I’m scared to bike with my 6 years old on the streets.

How did you pick Houston as a place to call home?

We chose Houston for my daughter’s school. It’s a public Arabic immersion magnet school, the only one America!

I was very hesitant about Houston because I’m not fan of the South—its weather and lifestyle. But I have been so presently surprised by the city and happy we made this decision!

And we also love the city itself. The diversity and multicultural aspect was important to us. We are multicultural family—I’m from Poland and my husband is Palestinian-American—so it is important for us to raise kids with people who are as different from each other as we are. I love how much we learn about other cultures, traditions, and food just being in one city. We also travel to see and experience new things but it’s so amazing to meet and hang out with people different than us in everyday life.

Have you lived in other cities too or is this your first experience with city life?

I’m from a small town in Poland and moved to bigger city when I was 13 years old. When I was 18 I lived in the middle of city called Poznań and that’s where I fell in love in city life! Since then we have lived in Michigan, Louisiana, and Richmond, Virginia.

My husband and I travel a lot. I’ve been to many many places in Europe and my parents live in England so I visit London and Bristol often too.

Your daughter’s school sounds wonderful! Is there anything else that keeps you in the city? Why do you chose to stay?

To be honest, everything. I love the outdoor Miller theater—every Friday there is a show and you just need to take a blanket and some snacks and sit and watch whatever is playing. Or you can go to the zoo in the middle of the main park (Herman park is also amazing to just bike around). I love that I can bike my daughter to school, bike with her to the Children’s or Science museum—we bike everywhere, can you tell?

Yes, I can tell! Our family loves biking too, so I understand the thrill. Can you share a time you felt like your family was thriving in city life?

Two weeks ago we went biking with the kids to explore every farmers market in the city. It was a Saturday morning and we probably rode about 12 miles around the city! We took multiple breaks for playground time and a little nap for our 2.5 year old, got some good lunch, and walked around each farmers market. I felt like, This is it! This is what I’ve missed so much since I left Europe! I just felt so happy that this is my life in that moment.

How often do you have that feeling of joy and delight about the place where you live?

I’m being completely honest when I say every single day so far. It’s also winter in Houston which gives us the best weather during the year so if you ask me again in July my answer might be different. But I feel so happy living here!

Have you made any sacrifices for city life?

We would love to have a bigger backyard, but for now we don’t. It can also be frustrating getting from one place to another; sometimes it takes more time than we would like. When we lived in a smaller cities it was easy to go from one part of the city to another in just twenty minutes.

We moved to the city when our financial situation become very comfortable so I’m grateful that we don’t have huge sacrifices to make. I don’t want to live anywhere else than a city!

Does Houston have any challenges?

Houston’s bikers are fighting really hard for safer bike lines and a more bike-friendly environment in general. I think we need more of both. Most of the time I feel ok on my bike but sometimes I’m uncertain about riding with my 6 year-old on the streets. It’s just really challenging to share the road with people who drive huge trucks and aren’t used to sharing the road with a bike.

What have you learned from life in the city?

You know, most people we talked to about moving to the city told us that it was a bad idea, that it’s crazy to live in the city with kids, that we would be unhappy here. I’ve learned they were wrong!

Ha! You’ve proved them wrong! Would you give any advice to someone who is new to city life?

Get a bike! Kids or no kids, just get a bike.

Moving to the city can be overwhelming at the beginning but it’s so worth it and so satisfying!